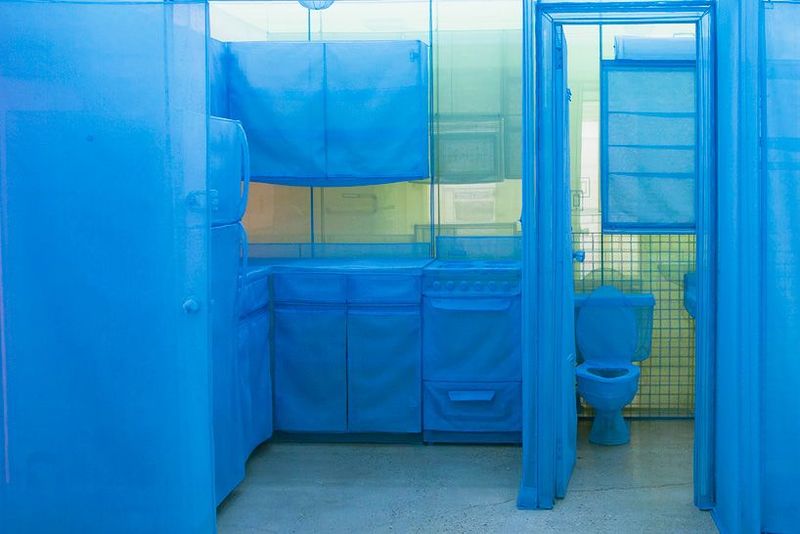 The ideal home of Do Ho Suh

The perfect home according to Do Ho Suh? Perhaps the opposite of what it represents to many. In essence, its core concept consists of collapsible materials that can be carried in a suitcase using thin, translucent fabrics. Though there’s much more to it than that.

Korean artist Do ho Suh studied at Seoul National University and continued his studies in painting and sculpture when he moved to the US. Having experienced living in two diametrically opposing cultures, one in his native country and one that he experienced as a racial minority, the theme of cultural diversity and identity naturally began to inform his practice.

Due to his nomadic existence, “memories”, and “home” are also particularly pivotal ideas in his work, where he now has roots in London, New York, and Seoul. Using delicate materials and mathematical processes to realize his impressive lightweight works, they’ve been featured in global exhibitions and have attracted international recognition.

His body of work “Perfect Home’ which took place at 21st century Museum of contemporary art, Kanazawa, unifies these ideas and with that, imagines how diverse and divergent cultural values contrast when placed side by side. The work, which is a comment on public and private domestic interiors and exteriors, were executed using fabric, which have been modeled in to stairs, corridors, bridges and gates.

The artist’s intention was to neutralise recognisable elements of the “Do Ho Suh home,” with the use of plain, monotone fabric. This way, a person’s possession becomes nobody’s to possess.

Where Do Ho Suh’s pieces that mimic his original home, were reimagined for the 21st century Museum’s space, they assume new interpretations, causing us as his audience to consider connotations of the ‘home” through a 21st century lens. What if the “home” wasn’t just comfort, familiarity and security? What if it was more uprooted, unfamiliar and transient? How would this effect the way in which humans interact with the world around us?